After the scintillating experience of riding in the curves of Shivaliks(Lowest Hiamalayan mountains) there was an itching inside me to go further and into more adventurous terrains.
Luckily did not need to wait a lot and Mranal's visit to India also brought me an invitation for the bike trip into the cradle of mountains and destination this time decided as Wangtu in Himanchal Pradesh. 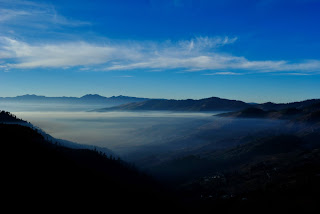 Probably this is the worst part of living in Gurgaon that for going anywhere you need to cross Delhi and is the most boring part and awful way of starting. But the hidden excitement regarding the upcoming surprises during the trip carries you on. By the way, like the last trip I had to do ride alone in small parts of the trip as I was supposed to be meeting the co bikers Mranal and Mohit in Dehradun. Started early in morning somewhere around 6 A.M I remember and vrooommm I left my place, full fledged loaded under the winter wears though, had worn as much as I could. There were hardly any people to be seen on Delhi roads in that cold and at time of the day especially. One does get a feeling he is the king of roads in such scenarios. Since i was alone so did not really take many breaks in between. Had stopped near Roorkee to have my breakfast and did not take long and reached Dehradun by 12:30 PM. 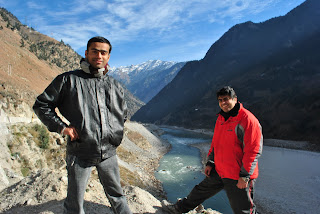 Did not go ahead on that day as far as the bike trip was concerned but had fun with Mranal ,roaming in doon streets. And it was a nice rest for the body before the tougher part of the journey.

Mranal was up on his toes early morning. It was colder in doon than it used to be in Gurgaon and I held my blanket tightly. With all my efforts going in vain, I was forced to get up at 6 am and by 7 am we left the house. Mohit joined us in way , the team was complete and we were ready to roar in the rocks. Within the first few kms only I got a feeling that I am with hard core mountain bikers and was having a tough time keeping a track with them. They too understood it very soon and slowed down keeping in mind mountain biking in adverse terrains was not something that i was very used too.
Well it did not take long for me to get surprises. Some 60 kms from Dehradun in village of Chakrata i had my first experience of biking on ice sheets frozen on roads. And before i could understand anything the bike skidded, zapppp, and i was all on roads. Mranal rushed from behind laughing that he knew i would fall over there. Well a fag gave the courage to move further. 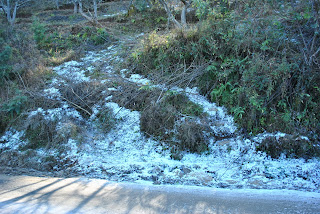 I must also tell anything that was considered second to biking in this trip was not fagging but chocolates. Had collected loads of them before leaving the city and we were not leaving any opportunity of gulping the yummies down. 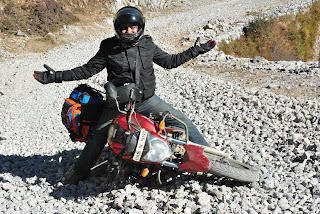 With little apprehensions I moved ahead, slowing the herd constantly and simultaneously being told to move faster. Did catch up in speed and lost fears of the last fall in some time and was doing pretty well by afternoon. Stopping frequently at various places where ever we got a view worth trapping in the lenses, gulping dairy milks and chit chatting in the rythms of natutre passed the first eventful day of the trip.
Had our late lunch in early evening at Rampur but decided to move ahead towards Wangtu as far as possible on that day. Finally we decided to pass our night at Sungri and got a cozy guest over there.

It would be sufficient to tell that we found ice sheets on our bike seats next morning if it was asked how cold it was there. Mranal was again the warrior who woke up first and got ready. Pestered others to get up as well, for the sake of reaching the destination. But who cared. It was by 8:30 am that some how me and mohit gathered courage and got ready that too after many rounds of tea. The view that the spot threw at us can not be said anything else other than awe inspiring. In true words when I myself opened the gates my mouth was like khulla ka khulla types u all know big beeepppppp...bigger beeepppppppp..(It is often said best feelings come in your local language).
Tried our best to trap the view,for future, as beautifully as possible. Failed once again against God's machine. Still looks good and is the first pic put in this blog on the top.

Trip after this was heavenly, every other view challenged the aura and splendor of previous ones. Got to stop at places where ice was frozen on mountains. Played like children with ice swords and went as crazy as humanly possible.

I will stop writing about the views over here because I know I wont be able to and my words wont to any justice, neither would be done by the pics i am putting here but then it is easier and smaller a task for me. 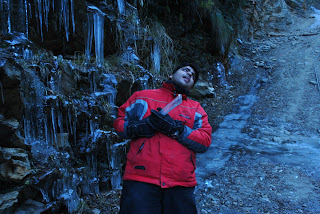 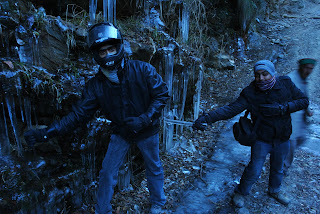 Story did not change as we moved further found stunning views and yet rougher terrains to bike. 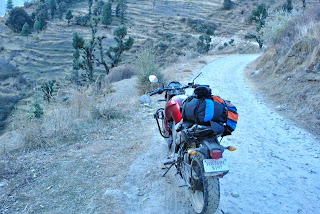 Reached wangtu somewhere aroung 2 pm in afternoon. Place was good but not as we had expected. Saw a board mentioning Sangla pass at 36 kms from there. When my friends came to know that I had never been to a pass this was a good enough reason for them to go ahead. Drove for sm 1 hr to reach the place. It was a moment of discussion over here. We could have gone back from here or driven ahead to Chitkul the last inhabited village on indo tibbet border and bike upto the height of 3500 mtrs abv sea level.
Craziness won the contest and we moved ahead.On reaching Chitkul we did not regret our decision for a single momemnt. Were at the foothills of snow capped mountains and the roads(should use path here word roads is misleading :P) from sangla to chitkul, each moment of it, was worth trapping in camera but neither the memory card supported this nor the time limits. We had to start back as well.

It was another chocolate fag celebration in chitkul where every thing seemed to froze if allowed. Left the place by around 4:45 and redishness had started spreading in the sky by that time. 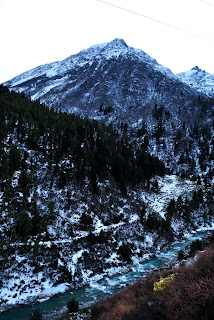 Drive after this was all a haste. Rush to go back had started. It did not need to be said that breaks were over now and it will be bikes running all the way if we had to have any hope of reaching any guest houses. Alas it was not destined for us to rest that day. We just kept moving from one town to another in our search of guest houses. Finally accepted that we will not get any and started a full fledge night drive to Shimla. Oh yes i forgot to tell we decided to go back by a different route. Taking very small breaks after every 40-45 mins we snailed ahead. Drving bikes at night time was really tough and even tougher at such low temperatures. Dont think it was above zero at any point of time.

To sum up day 3:
Whooaaaa what a X-Mas celebration it will be worth remembering all life :))))))

Reached Shimla by 5 o'clock in the morning. Body was aching by now especially the lower backs. Booked a hotel as soon as possible. City was brimming with tourists as it was chistmas day before and it was a sunday in itself. All hotel rooms being booked. Got a room somehow by 6:30. No one cared of anything. zzzzZZZZZZZZZ we were all in deep sleeps as soon as we got to touch the luxury of beddings.

Woke up at around 1 pm. This rest did immense help to body, only thing now needed was good food. Had a nice lunch in way to Solan. We were returning from such magnificently beauty striking places that on that day we did not even care to look into the normally so beautiful looking city of shimla. Our eyes were still twinkling with the views we had relished on trek the previous day.

Well the co bikers had to take another route from Solan for Dehradoon. Had nice flicks together before we departed and Shubh kaam ke sirf pahle hi nahi balki pure hone pe bhi kuchh meetha banta hai. So our last dairy milk together with bikers' laughter pouring into the Solan's air. 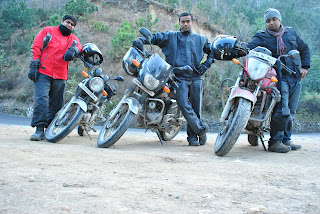 For me Gurgaon was still some 380+ kms. I had decided if the roads will be good I will stretch myself and rather rest at home the next day. It was all going as plan but suddenly after crossing Chandigarh it went foggy like a mad man. Did try to ride for some time but finally gave up and rented a room in kurukshetra. Body still longed for rest and i did not show any misery either. I showered my body with the pleasure of sleeping.

After this overtly luxurious rest I was into my elements again. The traveler soul had risen by now and realised the bliss of stopping in kurukshetra by chance. Got lovely portrait pics in city and roamed through the local streets for few hours after checking out from the hotel.

Once i felt content with my knowledge of the city (though i will go back there to explore it fully primary reason being I felt it being very similar to my hometown varanasi) i started back for gurgaon. Roads were smooth like hema malini's cheeks (to put in lalu ji's words). And any kind of restriction of speed was because of your own beast's limit. Drove as fast as i could and was as the entry of new delhi within some 2 and half hours.
Again it was delhi which needed to be crossed and no excitement of upcoming trip was there but heart was brimming with experiences worth millions to be shared with friends and a world that existed in those mountains,trapped through the lenses, to be shown to the the rest of contemporary world who generally call it by the name of heaven. 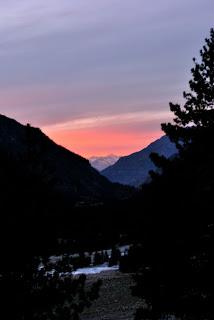 PS: Conflict just grew wider. (For those who know about it)
But the lost one became victorious.

And yes BIKING in mountains is ADDICTIVE. Will be back soon. I SWEAR.
Posted by Unknown at 12:54 PM

a vivid picture !!! the scenes & the scenery was brought alive by your narration...great piece ..enjoyed reading it ..

Promote Your Page Too

Promote Your Page Too